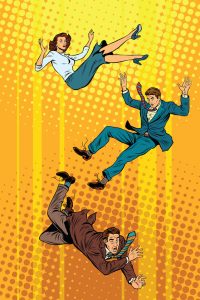 In last month’s blog, which was about something completely different,  I mentioned my earliest memory of catastrophising something.  When I was 8 I was out shopping with my aunt and somehow accidentally stood on the Liverpool goalkeeper’s toe.  He pretended to be injured and, unaware of the joke, I suddenly became convinced that Liverpool would not win any trophies that year and it would all be my fault.  My picture would be on the front page of the Echo, Liverpool fans would hate me and my dad and uncle would be absolutely furious and never speak to me again.  I would probably get expelled as well since Mr McGrory, the headmaster, was a Red.  In a heartbeat I was planning my move to Glasgow to live with my nan and grandad there, after all, if I was hounded out of Liverpool it was the obvious place to go.  I was absolutely distraught.

Most of us catastrophise things sometimes, meaning that we imagine things as being much worse than they actually are. If you do, you’ll recognise the sequence of events I just described and which unfolds in a matter of seconds:

Clients catastrophise things at least a couple of times a week.  Sometimes I can just raise an eyebrow, say ‘Really?’ and we both start laughing.  More usually, the client genuinely believes that the disasters and their final, hideous and always shameful consequence are all about to happen.  To make it worse, they feel that the whole sorry episode is entirely their fault.  Anxiety and stress are the result until the events actually unfold, but some of my clients are frequent catastrophisers and their confidence (and health) suffers as a result of their living in a state of permanent dread.

Here’s what to do when you find yourself catastrophising:

1. Challenge your initial reaction.  The thought will pop into your head, but you don’t have to believe it.  Remember, thoughts are not facts.  You definitely don’t need to let the sequence of ever worsening, imaginary disasters unfold. How much damage could a skinny 8 year old in sandals realistically do to a six footer tall professional athlete?
2. We’re biologically programmed to focus on the negative.  Being aware of potential dangers keeps us safe and is a good thing, unless we allow what Steve Peters calls our chimp to run riot.  Calm the chimp down by taking a few deep breaths and mentally saying Stop!.

3. Keep things as specific as possible.  Ask yourself some detailed questions.  What injury could Ray possibly have sustained as a result of my standing on his toe?  How long would he realistically be out of action in the event of that injury?   Did Liverpool have a competent reserve goalie? How much is the success of the team influenced by the 10 outfield players?  Getting into the practicalities helps to calm the chimp and allows you to gain some much-needed perspective on the problem.

4. Mitigate the situation.  If there is still a problem, what can you do?  Who do you need to tell?  Who can help? How can you minimise the risk of the disaster actually happening?

Thinking in this way would be a bit of a stretch for an 8 year old, I know.  Even so, I needn’t have worried, Liverpool went on to win both the League title (now the Premiership) and the UEFA Cup (now the Europa League), which was pretty good going I’m sure you’ll agree.  As for Ray Clemence, he won his first England cap and played really well all season, completely unaware that he had given an eight year old nightmares. You know, what usually happens when we catastrophise is that the predicted disasters seldom unfold and if there is a problem in the end, we always cope somehow.  We have given ourselves a heap of worry and stress for absolutely nothing.  So next time it happens, stop it in its tracks.

For a free, new-obligation, initial chat about how coaching might help you become authentically and consistently confident click h

ere to book a slot in my diary.  I look forward to hearing from you!

Sign up to get blog posts and other occasional news from Jackie direct to your inbox.