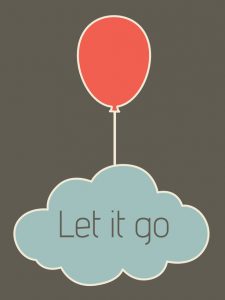 A few years ago my husband went into hospital for a straightforward procedure that we expected to be done in a day. Instead, it uncovered a serious health problem and he was kept in hospital until they could do a major operation that saved his life. In the hospital, everything seemed chaotic and random, and I found that chaos and randomness quite difficult to bear. I said as much to his consultant who smiled and told me to trust the system, not to fight it and everything would be OK. And he was right. Somehow tests happened, checks were made, meals arrived and stuff, in general, got done. When I stopped stressing about the logistics and organisation of the hospital I was better able to focus on what really mattered: my husband.

Acceptance is a powerful and underused skill. Over and over again, I hear people complaining about situations that are temporary (the hot weather, the World Cup, a big project) and see people fighting battles that they just can’t win. We seem to think there’s something noble and heroic about pushing for change, struggling, when in reality it’s often a complete and utter waste of time. Of course there are times when you should, indeed must, fight, but there are also lots of times when just going with the flow, letting things be, rising above it all is absolutely the right thing to do. Here are a couple of examples, shared as always with the permission of the clients involved:

A new client recently changed jobs. He had been stressed and unhappy in his previous role and was worried that he was in the same situation this time around. He came to coaching to explore his thinking, and his options. We talked about where the stress had come from and he realised that he had been fighting to change things in an organisation that really didn’t want make changes he thought were necessary. The result was conflict and stress. The same thing was happening in his new role. The company was chugging along but my client had identified a number of improvements that he felt should be made to increase efficiency and profitability. However nobody else on the Board, including the shareholders, thought anything needed to be done differently. They were quite happy as they were, for now.

Through coaching he realised that he had fulfilled his obligations to the company by drawing the Board’s attention to his ideas but as there was no desire to change, there was no point fighting. He therefore had a straight choice to make: get on with the job the company wanted him to do and accept that there was no real appetite for the sort of innovation he was interested in, or find another role elsewhere. After some soul searching he decided to stay where he is and is now enjoying the fact his job is quite 9 to 5, there’s no real pressure although it’s well paid and he has time for the other important things in his life. That sounds like a pretty good deal to me.

Another client’s team isn’t doing as well as he thinks they should. One of the team members is a plodder and my client thinks they’re the weak link. They do a decent job, they’re well liked in the team and are reliable enough, they’ll just never set the world on fire. Nor do they want to. My client however wants a team of stars and so has sent the plodder on training courses, paid for coaching, put them on a performance contract, threatened, cajoled but nothing changes. The plodder plods on, doing a decent enough job. She has no interest whatsoever in career paths or personal development; she’s happy where she is, for now. My client is outraged by this attitude, but again, it’s a battle he can’t win. We talked about what he could do. In the end he decided to just let her be. The plodder is a valuable enough member of the team, there’s no reason to fire her, so my client just turned his attention elsewhere. When he stopped fighting the plodder’s contribution improved, as did the overall team performance. Why? Because she didn’t feel hounded to be something she wasn’t and my client was directing his energy and attention towards more fruitful activities. Needless to say, accepting the situation also reduced his stress (and fury!).

Think about stressful times in your work. What was happening? Were you fighting a battle you couldn’t win? If you think you might be in a similar situation just answer these questions:

I’m not religious but I do like the serenity prayer:

Work on developing that wisdom and you’ll be a lot happier and more successful, I promise.